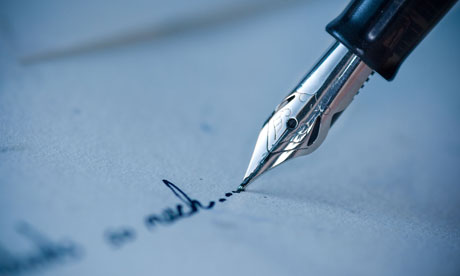 A recent article on poconorecord.com looks at the Pen Pal Club and the not-so-lost art of letter writing.

People are choosing to do the things their grandparents once had to, though perhaps in a more studied way.

Some grow and can their own vegetables, and some sew their own clothes.

Some even — don’t be shocked — write letters. The kind that need envelopes and postage.

They hunt down and stockpile eye-catching, uncanceled vintage stamps. They practice calligraphy and learn to make lovely swirls. They seek out small-batch letterpress stationery. Their artfully addressed envelopes, adorned with enough old postage to meet today’s rates, is fit for a hotel bellboy’s tray in a Wes Anderson film.

One evening a month, the L.A. Pen Pal Club meets on the eighth floor of the Spring Arts Tower downtown, in a stationery store festooned with red, white, pink and purple paper hearts.

Letter love affair
Paper Pastries Atelier is the studio and shop of Margaret Haas, 30, who launched the club in 2010. Her love affair with letters, she says, began when she was 5 years old and started making birthday cards — heavy on stickers of kittens and rainbows — that her mother sold to co-workers at her factory job.
Now she does custom calligraphy and stationery design. The group, which has more than 7,000 members, encourages gatherings such as letter-writing socials and envelope-making workshops. It even has a letter-themed book club, whose far-flung members meet via video chat.

“When you get a letter, it’s not something minimized
or clicked away…  It’s like a breath, a respite in the day.”

Who does this?
Narine Riley, 25, of Pasadena — who found the club on Instagram — was writing one of numerous cards she would mail to her husband to celebrate his birthday week. In a stylish, striped pencil case, she carried multiple ink options, as well as correction tape for when she made mistakes.

Lydia Clarke, 38, came straight from a long, hot day at Grand Central Market, in Los Angeles, where she’s a co-owner of DTLA Cheese. She brought Erika Mulan, who tends bar in Pasadena.

Mulan, 33, has a pen pal who used to work at her regular coffee shop. They started writing when he moved to Atlanta, and soon his girlfriend joined in.